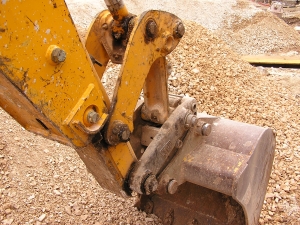 For the past several weeks my neighborhood streets have been lined with backhoes and dump trucks. Even though the additional traffic has been difficult to maneuver around, I’ve been content with the work—whatever it is they’re doing, until most recently.

During the past week multi-colored flags were placed in my yard denoting various utility locations. Then, only a few days later the mammoth machinery approached my street. Naturally, I became much more interested in the work that was transpiring. The men soon began digging what appeared to be large randomly placed holes.

At one point a big burly man climbed off his backhoe to speak to my neighbor and me. He explained that the city was mandating that the old gas pipes be replaced with new ones. Seems the old gas lines were faulty and, if not replaced, would eventually fail. We asked the man several questions including: What neighbors would be affected? How did he know exactly where to dig?

“Well,” he said, “The entire neighborhood will be affected; no one is exempt.” He also told us that he knew exactly where to dig by following the map laid out for him by the city.

Where am I headed with this story, you ask? Does this simple life lesson offer spiritual parallels?

Yes, indeed, it does. Here are just a few spiritual similarities for your consideration:

In the days and weeks ahead the new gas line will be covered with dirt and eventually grass will grow back, making it challenging to detect that any work was ever done. Unlike a new gas line, a life genuinely changed by the indwelling Spirit of the Lord Jesus Christ is unmistakable! It produces long-lasting, noticeable change.